Have you ever had someone exchange something with you before? How did you feel about it? Did it make you smile? Was it a good exchange or bad one?  Was it an easy exchange to do?

If you would like to download or stream the song please feel free to use any of the links below or search your favorite music application. Whatever you decide we at Divine Keys appreciate the support and pray deeply that you are really blessed by this Piano Piece. 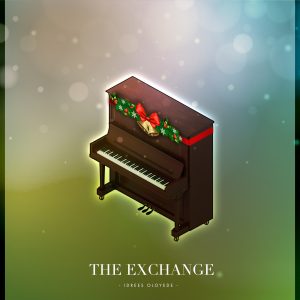 Story Behind The Crushing Piano Piece
There are times where you will have to exchange things which you may not have planned for. The one for me (and those who know me) is that unnecessary spending of money. Ahhhh man. I hate it when I have to exchange money for things I did not plan for, such as a burst tyre or when you take your car for a service and they tell you that you have to pay 100’s of pounds to cover the cost of an issue. An exchange could be time, another major one. It is very interesting how an exchange can make you feel. When I have payout, it makes me really annoyed especially when I feel I have done everything to avoid it. But having said that I was over the moon when I exchanged a ring💍 with my wife @mrs_o23. The joy that filled my heart when it happen, even now. Its like whoooooo.... the Joy is just real...

So you might have guessed that this next #PianoPiece is called #TheExchange. I thought since it’s Christmas 🤷🏾‍♂️, why not try and write a piece of music that is dedicated to the reason why Christmas even exists. For me the name of this piece is very significant, it shows the very thing that one person can do to make such a difference and impact to someone’s life, in this world, exchanging their own life for ours.

‘Greater love has no one than this, that someone lay down his life for his friends. - John 15:13’

It’s interesting because this person I’m referring to, “supposedly” had many crimes but did nothing wrong. Yet they took everything they got, the beatings, the crown of thorns, the public embarrassments, the shame, but decided to take the thing we deserved as his own. Now that’s the REAL exchange. The real exchange of Love.

“People were very cruel to him, but he was always quiet. And he did not open his mouth. People led him away like a lamb to kill him. A sheep is quiet when they cut off its hairy coat. In the same way, he did not open his mouth. They took him to a court. But they were not fair to him. They decided that he must die. So they took him away to die. And none of his people said that it was wrong. They did not let him stay in the country where people are alive. They hit him very badly because of the sins of my people.”

When you listen to the piece you will hear the joy and excitement of the JOY that is about to be birthed into this world. The music gradually changes to reflect what He is about the face in His life and the reality and #TheJourney of #TheExchange He is about to embark on, HIS LIFE... So yes it's a joyful time, time to celebrate but there was purpose for Him to come and fullfill. #TheExchange of Life was His destiny.

Big thank you to Isaac Kola Busari from IKB Media Group who made the artwork. Check out their website, www.ikbusari.com.